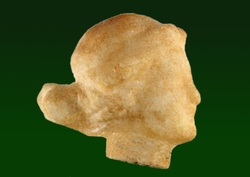 Phalasarna was first inhabited in the late Neolithic period. From this first early civilization, relatively little remains. In the early Bronze age there was a natural catastrophe, the area was abandoned, and people did not return for over 2000 years.

Dorians found Phalasarna again around the 8th to 7th centuries BC and built a city over the ruins of the prehistoric site. The new city-state had laws, a complex system of social support, and cultural exchange with peoples of the East. The strength of the local economy came on the one hand from skill in navigating the sea, which led Phalasarna eventually to become a naval power. On the other hand the Phalasarnians were famous as soldiers, and their skill in military arts created a demand for them as mercenaries, and as advisors to military commands from Macedonia and Persia.

In the 4th century BC, the citizens struck gold. Persian money aiming to stop the march of Alexander the Great against the Persian empire allowed Phalasarnians to fortify the city. Ancient geographers took note of the artificial closed harbor, carved out of a lagoon, and ringed around on all sides with quays, walls, and towers. Phalasarna traded across the Mediterranean and had especially close relations with the Spartans and the Phoenicians. Indeed the engineering design of the harbor is Phoenician, while details of the architecture are Greek. The city minted its own silver and bronze coins. The citizens worshipped goddess Dyktina at a temple atop the acropolis. Workshops produced ceramic vases that showed a mastery of Attic techniques, and local artists carved sculptures. Finally, Phalasarna was recognized for superiority at sea, and its harbor gave it a place in the history of Hellenistic culture.

However continual wars against strong neighboring city-states weakened Phalasarna, and frequent earthquakes and sea-level changes damaged the buildings and infrastructure. By the 1st century BC, the new buildings were unimpressive shadows of the earlier monuments. The citizens became pirates and stirred the anger of Rome. In 67 BC, Phalasarna was leveled by an invading Roman army determined to restore order to the Mediterranean sea lanes. A few people must have survived the Roman onslaught, and a small community remained in Phalasarna until a new natural catastrophe. In 365 AD, one of the greatest earthquakes in recorded history raised Phalasarna 6.5 m out of the sea in a few seconds, making its once-famous harbor forever useless while what remained of the city was flooded by a tsunami, buried in mud, and lost for another 1500 years.

Venetians who conquered Crete in the 13th century could not even find where Phalasarna had been located. A British traveler of the 19th century, T A B Spratt, found the city and its harbor 200 meters inland, but few believed him. Until 1986. Excavations began then under the direction of Dr. Elpida Hadjidaki, uncovering the towers and walls, surrounding the harbor, and eventually many of the harbor's quays and jetties themselves.

The harbor of Phalasarna was the reason for the city’s existence. It was its source of wealth. It led to its recognition in history. And it was the source of its downfall and destruction. The final irony is that the cataclysmic earthquake that moved the harbor 200 meters inland ultimately preserved it. No later society could bring ships to the same spot, and unlike almost every other harbor of the Classical or Hellenistic period, Phalasarna was never overbuilt. The excavations have only begun to uncover this once glorious city, and no one can guess how much remains to be learned in the future.
Proudly powered by Weebly